I’ve been reading many articles relating to the case of Lennox and Belfast City Council and came across this article written by a lady in the United States.  There is an awful lot of common sense in this article and I felt the need to share it with you:

The public is asking for an immediate investigation into the Belfast City Council (BCC) and their handling of the historic Lennox case. Several high profile people have publicly spoken out about the way BCC handled the Barnes family and their dog Lennox’s case.

View slideshow:Evidence of some of the BCC lies

The Barnes had paid BCC Lennox’s license fees for five years, every year the same description of his breed was labelled as “bull breed.” Lennox is an American bull dog and lab mix, proven in DNA testing; this breed does not fall under BCC’s DDO listing; but in May of 2010 Lennox was still seized and held under the DDO.

A dog warden who testified that she was “afraid of Lennox,” was publicly exposed to the perjury she committed, but still holds her position and is rumoured she was given a promotion.

At the beginning of 2012 pictures of Lennox’s health leaked out to the public. The pictures revealed Lennox with major hair loss and a neck injury. The Barns asked the BCC court if they could have their Vet evaluate Lennox’s health and have him treated, BCC denied their request.

There was a media blackout on the Lennox case.

The BCC refused to re-home Lennox to the United States even thou there are cases of dogs given the control (exemption) conditions so he could be re-homed.

BCC refused to allow the Barnes to say goodbye to Lennox before they killed him, and now refuse to give his collar to the Barnes as a keepsake.

There was no justice in the Lennox case, it seemed to be stacked in the BCC’s favour from the start, and the public is asking for an investigation. It was the public’s tax money that funded the one sided case and the public has the right to know how the money is being spent.

More Examiner articles you may enjoy:

One American woman’s fight to move a mountain for…

The ironic one day fight for life Patrick and Lennox…

Thank you for reading and sharing these animal articles. We can make a difference in the lives of animals around the world.

I know I haven’t blogged anything for over 6 months now, maybe that’s because not much has gone on in my life that I felt anyone would wish to read about,  but this subject has angered me so much and made me sit down and start typing….

What is Breed Specific Legislation?   Well it’s basically exactly what it says on the tin, although it mainly focuses on “bull breeds”.  In the UK this is particularly the case for the American Pit bull, to name just one.  So why the fuss?  Well the law doesn’t actually state Pit bull as such, it in fact says Pit bull TYPE and that is where the issue lies.

Over the past 2 years the biggest case has been over a dog in Belfast, Northern Ireland called Lennox.  In Belfast all dogs have to be licensed with Belfast City Council and in Lennox’s case his license stated that he was a BULLDOG, no mention of the word Pit bull anywhere !!!

OK so from birth Lennox was classified as a Bulldog until 2 years ago when Belfast City Council’s dog wardens, whilst “raiding” the house by mistake, decided to take a tape measure to Lennox’s head and so decided he was of Pit bull Type and therefore was an illegal dog.  Whilst Lennox’s owner, the Barnes family, refused to turn Lennox over, the council applied for an injunction and returned to seize Lennox and lock him away in an undisclosed dog kennels, where he would then become the responsibility of the Council for his welfare. 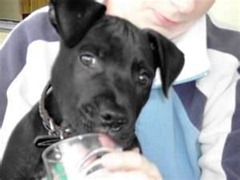 Naturally the Barnes family were not going to give up on their “young man” and so the legal battle began!!!  A legal battle between the owners of a dog who just didn’t look right and a local government authority, Belfast City Council…   After battling it out through the courts the council won their right to put Lennox to sleep, a decision which has created World Wide anger even with a 200,000 named petition to save this poor dog’s life, but of course councils being councils weren’t going to back down and wanted to make sure they were going to get their way….  According to Belfast City Council, Lennox was humanely put to sleep on Wednesday 11th July 2012 at approximately 7:00am BST.

There is far to much about this case for me to write and re-write what has already been said.  To be perfectly honest I don’t see any point in re-inventing the wheel, not to mention that it’s difficult enough for me to write about this as it is, but I would draw your attention to the editor of Dog’s Today magazine, Beverly Cuddy’s – Cold Wet Nose Blog where Beverly has written some interesting articles about the whole Lennox case.

Someone else whose work and comments on this case are extremely important is Jim Crosby, a Canine Aggression expert from the United States.  The article he has written makes complete sense to me and the video he shows in the of Lennox’s behaviour certainly does NOT show a dog displaying any kind of aggression or any aggressive tendencies.  I urge you to go and read this gentleman’s article by clicking on his name.

Maybe by reading Jim Crosby’s article in addition to the numerous other articles floating around the internet regarding Lennox, well maybe then can you make an informed decision on this question:

Is Breed Specific Legislation Right?  Or should it be punish the Deed NOT the Breed?

Thank you for taking the time and having the patience to read my article.  If you wish to post any comments then please do so and I will try and reply to them all as soon as I can.