Week fifty two….eventually. You may have stopped by to check on what last week’s bake was and noticed that nothing had appeared! Well that’s because it was an absolute s*** of a weekend, I won’t bore you with the details but between a hole in a water pipe and me damaging hubby’s car, let’s just say I wasn’t in the best frame of mind to bake! 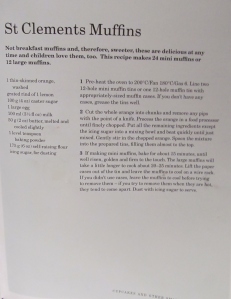 I chose Mary Berry‘s St Clements muffins, they sounded lovely but given the weekend events, maybe I was aiming too high? The recipe was straight forward enough, and I was careful not to overmix the muffin mixture. I divided the mix between the cases and popped them into the oven to cook. After the pinger went, I checked them and took them out of the oven. They looked a nice colour, and were springy in the middle. I left them in the tin for a while and then put them on the rack….and watched them deflate alarmingly!!! what a disaster- it about capped my weekend off.

I set about making a second batch, I was not going to be defeated , I followed the recipe really carefully, divided the mix again into the cases and baked them. I allowed a little extra time for cooking and when the pinger sounded, I left the muffins in the tin to cool slower and then put them on the rack. I still wasn’t overly impressed with them. They were not my idea of a muffin, light and airy with the distinctive muffin top and they really stuck to the cases.

I don’t think muffins are my thing, I have since googled “foolproof muffins” and found that like me, there are loads of people out there whose muffins do not rise as they should. I will aim to defeat my muffin nemesis …..but not this weekend!