Week fifty six ….and this week it was all “fingers” and hopefully no thumbs! I had some work commitments on Saturday so I didn’t have a lot of time on Sunday to fit in cleaning, shopping, dog walking….and any kind of bake! A quick delve into Mary Berry‘s Baking Bible and I came up with these two recipes. What will I do when there is less choice and the recipe is complicated? I could see some late nights coming up!

Any how, I set to making Bishop‘s Fingers first. The recipe was a variation on the other shortbread recipes already done so I wasn’t daunted by that. However, Mary asks you to use a square shallow tin….slight problem and cash flow was a bit tight but then I had a revelation….my invaluable tray bake tins from Lakeland ( have I mentioned it’s my favourite shop?!). I re-use the tins where I can so I had an older one in the cupboard that I cut and shaped ( or cannibalised..) into what I hope would suit the job in hand! I had to add some almond essence (yuk) and then sprinkle the top with flaked almonds (double yuk!).  Into the oven it went and the timer set.

When the timer pinged, I checked the shortbread but thought it was a bit pale so I popped it back in for another five minutes or so. Finally it was done, out it came, I marked it into fingers and sprinkled it with caster sugar. I left it to cool in the tin and then cut it into the fingers as described!

The second recipe used my trusty mixer to make the mix, and I had to rummage under the stairs to find an icing bag and a suitable piping nozzle. I haven’t piped for a while so approached this in a slightly more nervous manner.

Mary asks you to pipe a “finger” shape about 7.5cm long- no pressure then…..I gave it a go and was quite pleased that they were mostly the same length and size, just a few wavy lines- I call them character! The fingers went in the oven and I needed to keep an eye on them as they could quickly change from a golden brown colour to ….burnt if you weren’t careful. The biscuits had to then go immediately on to a rack to cool. Then Mary asks you to melt some dark chocolate and dip each end of the biscuit into it and allow to cool. Well, by now you may have realised that I am not overly keen on dark chocolate but as the other tasters do, I compromised and did half in dark chocolate and half in milk chocolate (and a big thank you to my other mum and dad for coming to the rescue in getting some chocolate for this x). 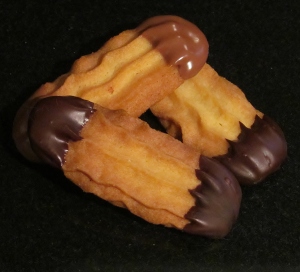 The biscuits look quite nice and I think the milk chocolate ones are nicer but that’s just my preference.

Oh no- it was the final of The Great British Bake Off tonight- what will I watch on a Tuesday night to keep me inspired now? I sat on tenterhooks for the whole hour and was so so pleased when Frances was announced as the winner- especially as I had been on Team Frances from day one! Well done Frances!