Week sixty one and my bakes this week helped take my mind off what I am facing tomorrow…but more of that later. This week’s bakes were also disappointing in some ways too….

I delved into Mary Berry‘s Baking Bible and wanted to make a start on my Christmas cakes so I chose her fast mincemeat Christmas cake recipe and dug out my trusty Lakeland cake tin that can be divided into smaller cake sizes so I had four square cake tins. 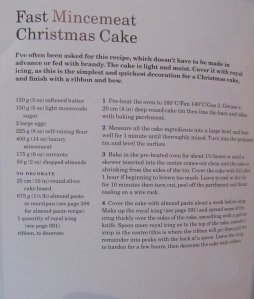 Mary’s recipe is the strangest Christmas cake recipe I have ever made, and I make Christmas cakes for friends and family most years. usually I am up to my armpits in various dried fruits, candied peel, brandy etc. but nope, not this year. Mary’s recipe uses mincemeat in a jar along with some sugar, currants, flour, butter and some eggs. That was pretty much the recipe. I made four batches and poured them into my tins which were greased and lined. I popped them into the pre warmed oven for the hour and three quarters that Mary states. After the timer pinged, I got my trusty skewer and checked the cakes. Imagine my disappointment when I saw that all four cakes had sunk. I hadn’t opened the oven at all during the bake and had pre warmed the oven so I don’t know why they did. I was very disappointed but took heart that the bottoms of them were flat so that will effectively become the top but I will know that they weren’t right. I will now wrap them in foil, feed them a little alcohol- Mary doesn’t add any to this cake and I think a little gives it some flavour. I will also then decorate them and fancy trying some sugar craft modelling…..

The second recipe was Mary’s carrot cake. I had a major problem with Mary’s recipe because it has banana  (in a carrot cake?!) and I can’t use banana in anything at home because of hubby’s allergy. So I looked on Mary Berry’s website and found that she does a lovely carrot cake recipe without banana here . I also decided to make it as a tray bake rather than the usual cake.

I mixed all the ingredients together and popped the tray bake into the oven. After the allotted time, the cake was done and a lovely golden brown. I left it to cool in it’s Lakeland tray bake tin and set about making the creamy topping. I spread the topping over the tray bake and put pecan nuts on it rather than walnuts and popped it into the fridge. I can’t wait to try a slice of this….

For those of you who drop by this blog occasionally you will know that at New Year last year, I had to go into hospital for some surgery. Well tomorrow I have to go in again for another small procedure- small in time spent in theatre but a reasonable time recovering. Hence the blog actually being on time today and I am not yet sure if I will feel up to baking at all next week yet. I am having this procedure done.

Finally, I got to see the Day of the Doctor last night. In case you hadn’t guessed, I am quite the Dr Who fan and thoroughly enjoyed the 50th anniversary program last night. Well worth the wait and way beyond any hype. I pressed the red button after the program and also enjoyed the Five doctors (almost) which had Peter Davidson, Colin Baker and Sylvester McCoy in a spoof drama trying their hardest to get cast into the program. It was hilarious!