Week ninety one and I obviously had a bit of a “glazed” feel to this weeks bakes! I dipped into Mary Berry’s Baking Bible and was inspired to try another bread recipe after watching the efforts on The Great British Bake Off for bread week.  The honey glazed walnut bread sounded scrummy and Mary assures you in the recipe that it also makes fantastic toast (If it lasts that long- take note please chief tasters!!) I added all the ingredients into a bowl, added the dough hooks to my mixer and set it off. Mary says allow five minutes mixing/kneading for a machine or 10 minutes by hand. This is where it was all going so well….until plumes of smoke were coming off my machine! The dough was too much and the motor had burnt out so the machine went to the electrical scrap heap in the sky and I finished the kneading by hand. I left the dough to prove and set about getting the other recipe bits together. 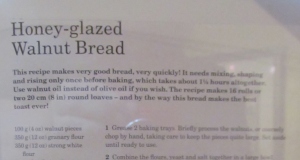 The proving time was done and I put the bread into the oven to bake, the recipe makes 2 good sized loaves. 25 minutes later, they were done and had that hollow sound when tapped on the bottom!

The second recipe was the glazed lemon tart. Firstly Mary asks you to make the pate sucree pastry- its a sweet shortcrust pastry. Then line a flan tin with it and chill while making the topping. Add the other ingredients together and beat well. ( with no mixer, I developed muscles I didn’t know I had!) Pour the mix into the pastry case and bake until brown and set.

While this is cooling- and Mary says you can eat it like this if you like, thinly slice a lemon, remove any pips, boils some water and sugar, add the lemon slices to this, boil again and leave in a bowl to cool for 2 hours. Then drain the lemons, arrange them on the tart, and glaze with some apricot jam that has been warmed through.

This looks and smells lovely and we will be eating some after dinner later!

There have been some strange goings on in my garden lately. It has all become a little overgrown with the bamboo I had planted some years ago, pretty much taking over the garden and with the recent rain, you could barely see up my garden through it all. I looked from my kitchen up the garden recently and found that the local wildlife had diversified somewhat from the native species! I know who to thank for this and will ensure that your garden enjoys a similar experience! 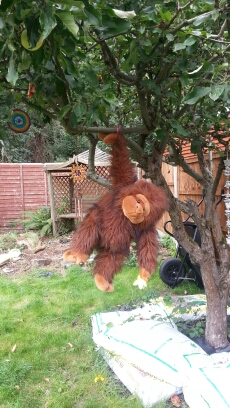 I was also sad to say goodbye to my trusty mixer- it was the best of both worlds, I could detach the mixer and use it as a hand mixer or attach it to the stand and use with the bowl  which could rotate if I needed it to.

I threw it in the chief taster’s trailer to go to the tip ( yes- it went in dirty- it’s going to the tip!) and waved it goodbye.