Week 117 and I now delve into Mary Berry‘s Baking Bible and flip back and forth through the pages looking for bakes I haven’t yet done which is getting smaller by the week!

I chose Mary’s Angel Sponge Cheesecake , I must say I haven’t really liked the baked cheesecakes that I have made and at least this one was not baked but is sounded different. Mary asks you to make a sponge first.  She asks you to beat the eggs and sugar together until it leaves a trail, then sift in the flour and fold in lightly. Put this mix in the prepared tin and bake.

Once baked to a golden brown, allow to cool and then cut in half. 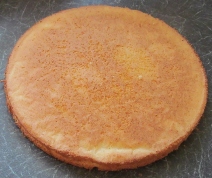 Please one half in the bottom of a deep cake tin, cut side up. Mary then asks you to make the cheesecake filling by beating the sugar and butter together, add the egg yolks , orange rind, orange juice and cheese and mix well. Whip the cream and fold into the cheese mixture, whisk the egg whites and fold them in- quite complicated! Spoon the mix into the tin onto the sponge and level, lay the other half of the sponge on top, cut side down. Cover with clingfilm and put in the fridge. Now Mary asks you to leave in the fridge for about 4 hours then remove from the tin and serve. Now after four hours, mine was nowhere near set and if I had tried to remove it, I would have had a puddle. At this point, I did what I usually do and looked at Rising to The Berry to see what Anneliese did and having read her blog, decided to leave mine in overnight. Even though I did this, when I turned mine out, it still sagged and when we tasted it, it was more like a mousse between two sponges. 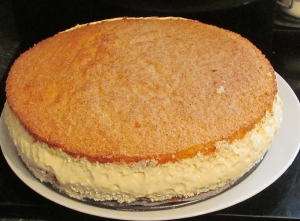 The second recipe was Mary’s Marmalade Cake. I nicknamed it “Paddington Cake” as Paddington loved marmalade. I very carefully chopped washed and dried all the cherries this time and added them to all the other ingredients and mixed well, thankfully it was one of Mary’s all in one recipes.

I lined a loaf tin with one of my 99p Shop liners, poured the mix in and put it in the oven to bake. I did observe Mary’s warning that it you were heavy handed with the marmalade, the fruit would all sink to the bottom as it would slacken the mixture. Once baked, allow to cool and then remove from the tin and warm some marmalade and brush it over the top. I must say that despite the amount of marmalade in it and on top, it still tasted like a fruit cake, the orange didn’t come through too much. 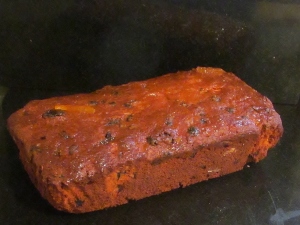 I had mentioned my blog might be a little late as indeed it is . This was because I was helping my chief tasters finish their garden by leveling the last bit ready for turfing. They brought a digger in and I had a go, it was great fun but harder than it looked. I was “chief skip leveller” – as in, when they dumped the earth into the skip, I made sure it was evenly distributed and the maximum space was used- with my trusty old Woolworths rake! 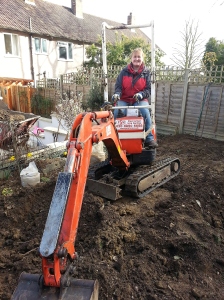 I have now reached the heady countdown of…….

Mary’s Baking Bible has 19 sections to it and I have now completed all the recipes in the following sections:

“Cupcakes and Other Small Bakes”