Week 130 and I apologise for the lateness of posting this blog, hubby and I have had a well earned rest and break in our caravan in South Wales and it was really needed. I did a bake just before we went away but didn’t get a chance to blog it and haven’t got the energy to bake today after the unpacking, washing etc. I have now put little bookmarks in my Mary Berry Baking Bible so that I can see at a glance where the remaining recipes are and how many are left. I had pulled out Mary’s devil’s food cake first. The sponge recipe was not quite one of Mary’s throw every thing in and mix ones but it wasn’t too complicated and once mixed, I put it into two prepared sandwich tins. Once baked, I had two lovely dark chocolate sponges. The next part was to make the American frosting and I had already made this once with one of my previous challenge recipes so I knew what I was doing……kind of!

I made the American frosting and then the race was on to spread it over the cake before it set and I kind of lost that battle but although it wasn’t pretty, it tasted better than it looked! 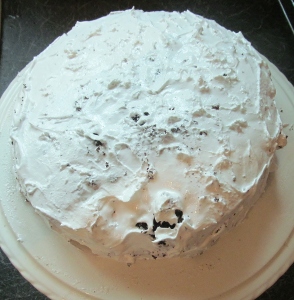 The second recipe was Mary’s Jane’s fruit cake. I have no idea who Jane is and Mary doesn’t explain in her recipe but hey-ho! All Mary says about this recipe is that it is a good family cake that goes quite dark when baked because of the wholemeal flour. I also had to go and find some buttermilk  in the supermarket which I have never seen before. I found it in the cream section!

The bonus of this recipe is that it is one of Mary’s throw all the ingredients in and mix recipes. I did this and poured the mix into the prepared tin. This cake is baked long and slow- over three hours of cooking time! Once baked, I wrapped it and put it in a tin and it travelled to Wales with us and kept us fed and energised for our holiday!

The Great British Bake Off is now going into it’s third week and I have been avidly watching. I was pleased to see that in the first week, Mary asked the contestants to bake her frosted walnut cake which I had already done so I watched with great interest having already done this one and commenting as they made their frosting. The biscuit week was interesting, I have not hear of or made Arlette biscuits and having watched the contestants, I think I will be giving them a miss! The next episode is bread week- always a giggle!