After the gluttony of the last few weeks, I needed a bake recipe that didn’t involve sponge cake or chocolate. Mary Berry‘s Baking Bible never fails to offer an answer and Mary’s Yorkshire Gingernuts fitted the bill nicely.

I had been considering missing a week this week, I think I had hit my “wall” as you hear runners say when they reach a certain distance. I had been feeling a little despondent and had even considered giving up the challenge but after giving myself a swift kick and talking to, the challenge goes on! 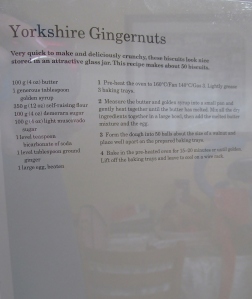 Mary’s recipe asks you to melt the butter and the golden syrup in a pan and then add this to all the dry ingredients. I must admit I had checked my store cupboard for all the ingredients ahead of my bake but thought I had more ginger than I actually had. Mary’s recipe asked for a tablespoon of ginger…and when I opened my pot, I had at the most a teaspoon’s worth. I found myself, at 4:45pm on a Sunday afternoon wondering where I could get some ginger. Luckily for me, I found my local Co-Op was still open and had just what I needed! The bake was still on! I added the wet mix to the dry and brought it together into a dough. Mary says to roll little balls about the size of a walnut and that the mix will make about 50 biscuits…well my version of a walnut must be different to Mary’s but I still must have made about 35 biscuits or so.

Into the oven they went and I set the timer and sat and waited. Once the time was up, I had a look and they smelt lovely and gingery. They were a lovely golden colour too. I took them out of the oven and put them on a cooling rack and put the next batch in. 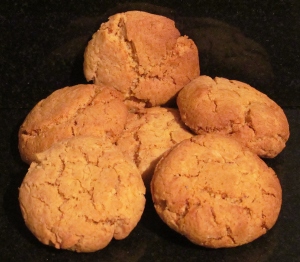 Once they were cool enough, hubby and I shared one between us and put the rest in a tin. I have taken some to work and hubby will give some to his parents soon. I must say that after a day, they had that lovely “snap” on the outside when you bite into them and a softer middle. For a “filler” recipe, I must admit that I would happily make these again!