Week 125 and my ever shrinking Mary Berry Baking Bible suggested these recipes to me to take to a friends house for a b-b-q!

I began with the coffee & walnut sponge …which ended up being a coffee and pecan sponge- I could swear I had walnuts in the store cupboard but they turned out to be pecans- oh well, still tasted nice and my twist on Mary’s recipe. Luckily this recipe was one of Mary’s throw all the ingredients in together and mix, divide between two sandwich tins and bake.

Once the sponges are cooked and cool, mix together the buttercream and sandwich the two sponges together and put some more on the top and decorate with some more nuts! 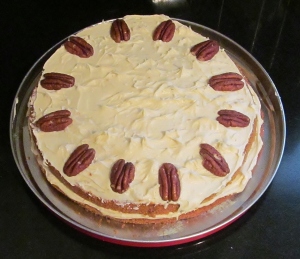 The second recipe was Mary’s american apple & apricot cake. This recipe used raw baking apple and dried apricots in it , a deep cake tin and a vague baking time from Mary of “between an hour and an hour and a half”… I made one cake and baked it for about an hour, tested it, not done, gave it another ten minutes, it looked done and bounced back to the touch test so I took it out of the oven, only to go back to it about half an hour later and DISASTER! It had caved in and was cooked around the edges but raw in the middle! This hit the bin- no photos allowed and I began again.

This time I allowed the whole cooking time – an hour & a half and this time it worked – YIPPEE!! I now had two cakes to take to the b-b-q.

It was lovely catching up with our friends and the cakes went down well. The added bonus was that one of their dogs has just had puppies and they are currently three weeks old so puppy cuddles were an added bonus – and out two hairy hoolies went mad when I got home!

The countdown is ticking on and is now……