Week 129 and my ever shrinking Mary Berry‘s baking bible and came out with three recipes this week, the chocolatines and mokatines were so similar for the recipe base that I could combine the two and then chose the apricot & almond gateau too.

I started with the chocolatines & mokatines recipe which both started with a genoese sponge. I made this sponge mix which was quite a list of instructions in itself. 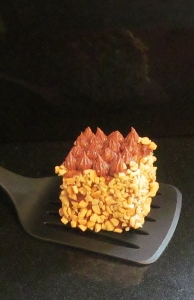 I did the same with the coffee ones and thought they looked rather smart.

The second recipe was Mary’s apricot & almond gateau. This recipe involved making the meringue mix with whisked egg whites and the monotonous task of adding the sugar a teaspoon at a time until stiff. Mary then asks you to fold in some ground almonds and then spread into 2 20cm circles and bake.

Once the meringue is made, add the apricots and some water to a pan and heat gently until tender and put into a blender to puree. Mix the puree with some of the whipped cream and sandwich the meringues together. Decorate the top with a dusting of icing sugar and swirls of whpped cream. This was a crunchy, gooey tasty pudding. 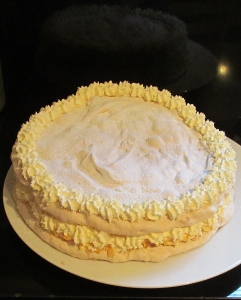 I was really excited to begin to see adverts for The Great British Bake Off 2015, I can’t wait, it’s the highlight of the year and hopefully the end of the challenge for me while the program is on….as my countdown because of 3 recipes this week has reached…