Week 124 and my Mary Berry Baking Bible is shrinking rapidly in terms of what recipes are left to bake! I dived into it and surfaced clutching her lemon griestorte and the petits fours aux amandes.

I began with the lemon griestorte. Mary tells you that it’s made with semolina and ground almonds instead of flour and it has a light but short texture- whatever that means!! I separated the three eggs that the recipe asks for and put the yolks and the sugar in one bowl and whisked them together, then added the lemon juice and finally the lemon rind, semolina and ground almonds. In another bowl, whisk the egg whites until they form soft peaks and fold into the mixture and pour into the tin . Pop in the oven for 35 minutes and then once golden brown, allow to cool in the tin for a few minutes and turn out. Once cool, cut the cake in half.

Whisk the cream until it holds its shape and fold in the lemon curd and sandwich the cake together with it and dust the top with icing sugar. Try to use a good quality lemon curd to give it that lovely lemon tang! I usually shop at my local Morrisons and brought their Signature Sicilian Lemon curd which is really yummy!

The second recipe was Mary’s petits fours aux amandes. Mary says they make very special presents, I wasn’t that keen but another recipe under my belt.

The recipe was simple enough, I had to whisk some egg whites, fold in ground almonds, sugar and almond extract and put the mix into a piping bag. Pipe rosettes onto a baking tray and top with a small piece of cherry and bake. When golden, mix some sugar and milk together and lightly brush over the petits fours.

The countdown continues and has now reached…. 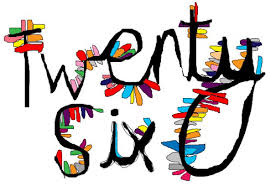 One of the chief tasters brought me a little gift recently, some beautiful measuring spoons. Mine are the usual plastic ones but these are rather special, so thank you and much love x