Week 128 and I dipped my toe into Mary Berry‘s Baking bible– it’s about all that will fit into what is left to bake and I came out with Mary’s Sachertorte and Coffee & Banana Vacherin.

I began with the sachertorte. This has oodles of dark chocolate in it and you know I really don’t like dark chocolate so I compromised and had 3/4 dark chocolate and 1/4 milk chocolate to take away some of the bitterness. Mary asks you to melt the first amount of chocolate and allow to cool slightly. Meanwhile beat the butter and then add the sugar, beating well still and then add the melted chocolate and vanilla extract, then the egg yolks then fold in the dry ingredients. Mary advises you that by this point the mixture will be quite thick- she fails to mention about the gut busting amount of calories already in this and we haven’t finished yet! In another bowl, whisk the egg whites until stiff and add to the chocolate mix. Pour into the tin and bake for about 50 minutes until well risen.

Remove from the tin and allow to cool. To make the slimline(!) topping, melt the chocolate gently and add the double cream, allow to cool slightly and pour over the cake spreading it gently. Finally when set, write “Sacher” on the top. The icing came out nice and glossy especially considering mine had some milk chocolate in it too.

The second recipe was Mary’s coffee and banana vacherin. I had no idea what a vacherin was so I looked it up and it says it is a meringue dessert filled with cream. This recipe caused me a great headache as I thought I had done all the banana desserts while visiting my family but this one popped up !! So I followed the principle of the recipe- a meringue filled with cream and made mine a fresh cream and raspberry vacherin instead as this house is a banana free zone because of hubby’s allergy- don’t want to kill him with my baking!

Mary asks you to whisk 4 egg whites until stiff, then add the sugar-225g of it-one TEASPOON at a time ..zzzzzzZZZZZZ. Once all the sugar is mixed in, the meringue mixture will be very stiff. Spoon it into a piping bag and pipe 2 20cm circles and bake. Once baked, allow to cool in the oven . This is where Mary and I parted company , I whisked the cream and used fresh raspberries to create my vacherin and thought it was very tasty! 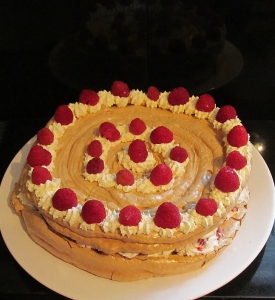