Week 123, and my usual dip into Mary berry‘s Baking Bible proved troublesome. I decided on the recipes but divided the bake over the week so that we were not inundated with a mass of cakes that might end up stale and in the food recycling bin.

I chose Mary’s strawberry dessert cake as my first bake . I followed Mary’s recipe carefully and mixed the sponge up carefully. I poured half the mixture into the tin and then sliced and put strawberries on to of this and then poured the rest of the mix on top and levelled the cake. I sprinkled flaked almonds on the top and then baked it for about 1 1/2 hours and then left it to cool a while before turning it out.

Mary suggests that you serve it warm with cream and who am I to disappoint ?! 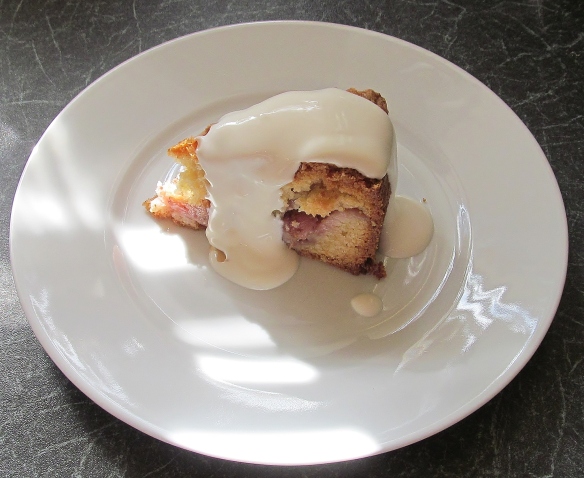 The second recipe later in the week was Mary’s crunchy top lemon cake. Luckily this is one of Mary’s all in one cakes and so it was an easy bake to put together. I baked it in the oven and then once it was cooked, I poured the crunchy lemony sugary topping on and left it to cool.

It seemed aged before it was cool enough to turn the cake out and the lemony smell was tantalising!

I have been following Mary’s new series ” Mary Berry’s Absolute Favourites” , it has given me some great ideas for general cooking and some new twists on some old favourite recipes. I have also enjoyed watching her first fly fishing adventure.

The countdown continues and I have broken the 30 barrier now and it has reached…..